Superchargers - The Superiority of Roush & Whipple

This one’s for Mustang enthusiasts, because when it comes to forced induction, there is no car more responsive to aftermarket performance mods than the naturally aspirated Ford Mustang GT.

And when it comes to getting more power out of that pony, we’ve got two of the most popular brands covered. Here’s our inside scoop...

Roush Performance was created in 1995 but their history dates back to the early 70s when founder Jack Roush, who previously worked for Ford Motor Company, started his own drag racing team. Having won multiple championships on cars he’d self-engineered he soon began producing his own line of race engines and aftermarket mods.

Nowadays the Roush product line encompasses upgrades in aerodynamics and styling, performance exhaust systems and their Phase 1, Phase 2 and Phase 3 Superchargers. While most of this is available from Ford in the form of a fully kitted ‘Roush Mustang’ in the USA, we’ve yet to see a factory-direct vehicle line developed for the Right Hand Drive (RHD) Mustang this side of the Atlantic (though all that could be about to change, you heard it here first!).

That doesn’t stop UK and European owners from wanting to get their hands-on Roush’s aftermarket line though, which is one of our most coveted ranges for 2015-18 RHD Mustangs. But so, when it comes to Superchargers, what are the options?...

Roush Phase 1 and Phase 2 Superchargers are very similar out of the box. Both have the 2.3L TVS (Twin Vortices Series) R2300 ‘Roots’ Supercharger featuring twin four-lobe rotors plus re-designed air inlet and outlet ports. The TVS charger boasts greater gains through enhance thermal efficiencies, higher volumetric capacity and operating speeds, plus a smoother flow of air. They are characterised by improved noise and vibration characteristics for immediate throttle response and power. Both systems are compatible with Manual and Automatic transmissions and Roush have kindly developed the RHD Conversion Kit to address the variances with EU spec cars, as well as offering Phase 1-to-2 Upgrade Kits if you wish to raise the bar after fitting your Phase 1 kit.

Roush kits come complete with all the necessary components to fit to your vehicle as well as a flash calibration to map your CPU.

If you’re serious about Supercharging your Mustang, you’ll have also probably heard of the Whipple Superchargers. Art Whipple, the company’s founder first engineered an Australian Sprintex ‘Twin-Screw’ Supercharger onto his own Chevrolet Silverado back in 1988. After years of working on developing chargers for corporations like Lysholm Technologies and the Eaton Corporation, he began his own line in 2005. Whipple has since revolutionized the technology, creating kits today that are renowned for dependability and performance.

Their Supercharger range features only the latest technology with exceptional results to increase compressor efficiency and lower overall noise level for a wider variety of applications. With research and development focused toward General Motors it’s no surprise that a Whipple Charger is one of the most sought after for the Ford Mustang.

To evaluate the difference between Roush and Whipple we’ll keep things simple with a straight comparison of Whipple Superchargers for 2015-17 Mustang 5.0L GT.

Both the Stage 1 and Stage 2 kits feature Whipple’s huge 2.9L Charger. However, the Stage 2 kit incorporates additional 132mm Throttle body and 72lb/hr injectors. Their Twin-Screw design is deemed to have the highest efficiency than all other roots or centrifugal superchargers, boasting greater power across all rpm levels. 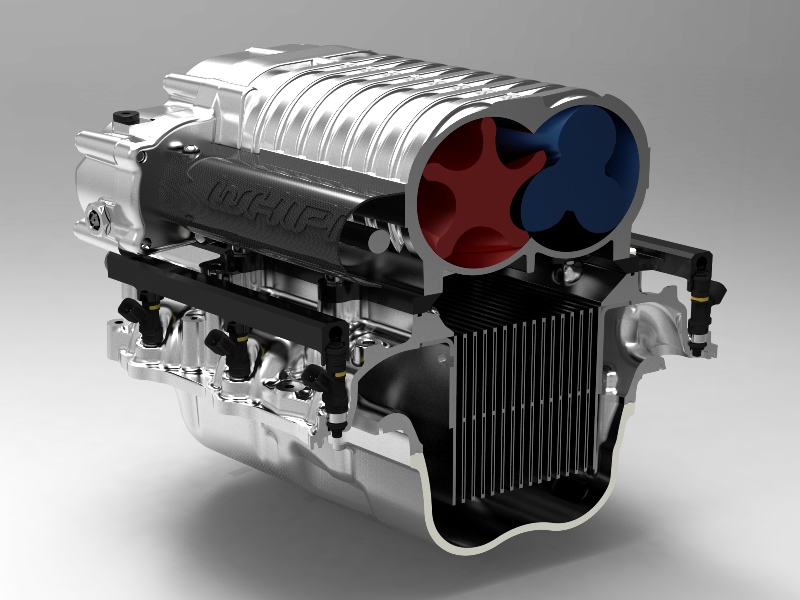 Just check out the numbers; the Whipple Stage 1 Kit produces massive 750 Horsepower with 620ft/lbs torque, and the Stage 2 goes even greater promising 825 Horsepower and 640ft/lbs torque.

Whipple chargers are bolt-on meaning they do not require modification of the vehicle to fit, even on the Right Hand Drive specs. Their kit also includes the essential tuning file to map the CPU.

The core difference between Roush and Whipple is the design. Roush uses a Roots style system while Whipple uses the Twin-Screw format. (I cover these differences in more detail in my previous article).

Ultimately though it’s a hard measure to say which is better… Roush is undeniably more akin to OE manufacturing and quality, but Whipple boasts greater expertise in aftermarket applications.

Price-wise, they are on par with one-another but, though Whipple of course offers more BHP out of the box, pairing a Roush system with complimentary mods can achieve similar results in a more bespoke fashion.

All their kits for 2015-17 Mustang 5.0L GTs come with a complete registry of components making installation relatively straightforward. Though again we’re not suggesting a novice should install this, or that you can do it in your garage after work one night! But for a professional garage, you won’t have to worry about them cutting bits of your beloved Pony up!

So whether you have a streetcar you want to make faster, a daily driver you want to take on the track or you’re building an outright drag car, we have a Supercharger we can recommend for you. Get in touch on +44 (0)121 288 2561 or email us at sales@nemesisuk.com.

If you are serious about Supercharging your car I would certainly look at my next blog, which details other modifications you should consider making to your vehicle to help it cope with the increased power output and make the most out of your ride.